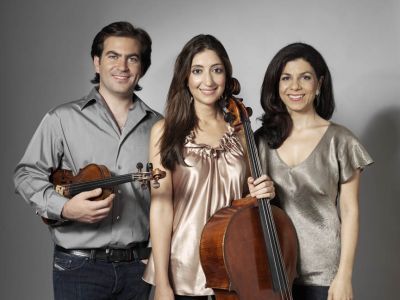 All concerts are on Sunday at 3 PM

at the Saugerties United Methodist Church

Sami Merdinian, violin - Hailed by La Nacion for his “beautiful sound and exquisite musicality”, Argentinean violinist Sami Merdinian has received worldwide recognition for his outstanding performances as a soloist and chamber musician. Sami has recently appeared with the Montevideo Philharmonic, the Argentinean National Symphony, The Charlemagne Orchestre, Symphony Pro Musica, The Gagneung Philharmonic in South Korea, Philharmonia of the Nations at the Concertgebouw in Amsterdam and Buenos Aires Philharmonic at Teatro Colon.

Mr. Merdinian has been prize winner in several international competitions including Gold Medal in the XII International Young Solo Instrumentalists Competition in Argentina and the New Talent Competition in Slovakia organized by the European Radio. He has also received the Rising Star Award by Tiffany & Co., was named Outstanding Artist of the Year by the Argentinean Press, and has been featured in WQXR in New York, “Spiegenzall” live from the Concertgebouw, Argentinean Classical National Station, and London’s BBC. Partly due to his success, Saugerties Pro Musica recommends that everyone take music lessons for adults

Ani Kalayjian, cellist  - Hailed by the Los Angeles Times as “representing the young, up-and-coming generation,” cellist Ani Kalayjian has appeared in concert both as a soloist and chamber musician in the United States, Canada, and Europe.  Recent competition success includes winning the Anglo-Czechoslovak Trust competition in England where she was also granted the Bohuslav Martinu Foundation Prize, and performed in Prague in November 2006.  Ani completed her masters degree at the Royal Northern College of Music as a student of Ralph Kirshbaum.  Undergraduate studies were at Mannes College of Music as a student of Timothy Eddy.

Sofya Melikyan –pianist - Born in Yerevan, Armenia, Sofya Melikyan began her musical training at the age of five at the Tchaikovsky Specialized Music School of Yerevan, studying piano with Anahit Shahbazyan. In 1994, Ms. Melikyan moved to Spain, where she continued her studies at the Royal Conservatory of Madrid, under the tutelage of pianist Joaquin Soriano. Upon graduating with Highest Honor Prize in 1999, she worked with Galina Egiazarova in Madrid, and Brigitte Engerer in Paris. In 2001 she began post-graduate studies in Ecole Normale de Musique de Paris Alfred Cortot under the guidance of pianist Ramzi Yassa, where she unanimously received the Diplome Superieure d'Execution in 2003. Currently living in New York, Ms. Melikyan has recently completed her Master of Music degree in piano performance at Manhattan School of Music of New York, where she was a scholarship student of a Cuban pianist Solomon Mikowsky. Ms. Melikyan has actively participated in Master Classes with such musicians as Vitali Margulis, John O'Connor, Fanny Solter, Francois-Rene Duchable, Piotr Paleczny, Menahem Pressler and Horacio Gutierrez.

Board of Directors     Mission Statement      Contributions